Isaac Watts was the son of a schoolmaster, and was born in Southampton, July 17, 1674. He is said to have shown remarkable precocity in childhood, beginning the study of Latin, in his fourth year, and writing respectable verses at the age of seven. At the age of sixteen, he went to London to study in the Academy of the Rev. Thomas Rowe, an Independent minister. In 1698, he became assistant minister of the Independent Church, Berry St., London. In 1702, he became pastor. In 1712, he accepted an invitation to visit Sir Thomas Abney, at his residence of Abney Park, and at Sir Thomas’ pressing request, made it his home for the remainder of his life. It was a residence most favourable for his health, and for the prosecution of his literary labours. He did not retire from ministerial duties, but preached as often as his delicate health would permit. 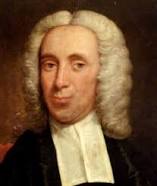 1. Alas And Did My Savior Bleed

2. Alas And Did My Savior Bleed

4. Am I A Soldier Of The Cross

5. And Now Another Day Is Gone

7. At Thy Command Our Dearest Lord

8. Awake Our Souls Away Our Fears

10. Before The Lord’s Eternal Throne

11. Begin My Tongue Some Heavenly

12. Blest Be The Everlasting God

14. Do We Not Know That Solemn Word

15. Father We Wait To Feel Thy Grace

16. Hosannah To The Prince Of Light

17. I Sing The Mighty Power Of God

18. I Sing The Mighty Power Of God

21. Joy To The World The Lord Has Come

23. Thou Whom My Soul Admires Above

24. Twas On That Dark That Doleful

25. When I Survey The Wondrous Cross